Business one to watch for 20 years 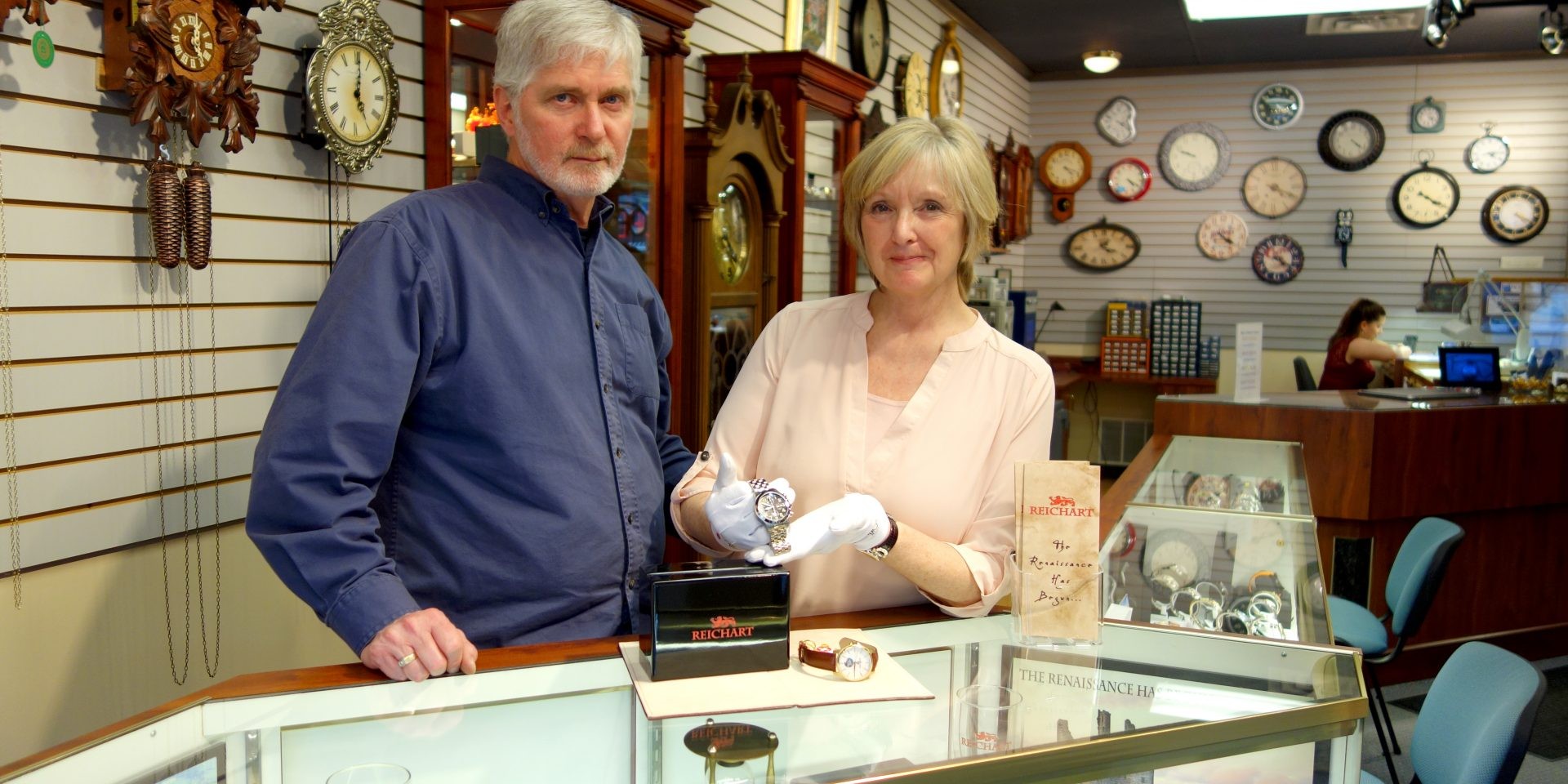 Located at 106 Mississaga St. E. in a beautiful old building built in 1881, Perfect Timing transports you back to yesteryear with its brick walls, fireplace, wing-back chairs, and countless antiques – mainly clocks. Kind and approachable shop owners Rick and Aime Brownbill welcomed me in, and showed me what they were currently working on. Rick was in the middle of restoring the iconic 1920’s grandfather clock that normally stands in the main area of the Orillia Soldiers Memorial Hospital. It was time to get it ticking again.

Rick chanced into a life of Watchmaking at age 15, when he entered a jewelry store in his hometown of North Bay. “The store owner asked if I wanted to be a Watchmaker, and before I knew it I was being put through school,” said Rick. He graduated from George Brown College in 1976 and entered the trade while it was at its peak. Watchmaking became flooded after World War II and quickly became the largest worldwide training program. Rick was 1 of 3 in Canada who successfully graduated from the intensive three year program. However, the trade took a turn in the 80’s when certification was no longer required, and anyone could call themselves a Watchmaker.

The Brownbills established their watchmaking business, Perfect Timing, in 1996. Working from an upper office in Barrie, they did wholesale repairs for close to 20 different jewelry stores. Their original business plan was to be in retail, offering sales with service, and after 2 productive years they decided it was time take the next step. Orillia was perceived to be a closed off city at the time, and local jewelers warned that their business would never survive, but Orillia made sense to the Brownbills. “The size of the town was appealing to us. We could see ourselves watching children grow, teaching them about clocks & watches, and sharing in their landmark life experiences,” mused Aime. With only a handful of clients, they headed north with their vision in 1998.

Making the switch from wholesale to retail was a big jump. “Our business lends itself to the charm of the main street, so being downtown was important to us,” added Rick. They heard about the Self Employment Assistance (SEA) program in Barrie and were the very first partnership to be accepted. Through there, they heard about the Community Development Corporation (CDC) and its available funding. “We had a face-to-face interview with Donna Hewitt, General Manager at the time. She was very encouraging and welcoming,” shared Aime. They received a small loan of about $3-5K to do renovations inside and outside of their shop, which used to be located at 91 Mississaga St. E. Customers welcomed them right away, and a local couple did the honors of cutting the ribbon for their grand opening. “We were so excited to serve the community. The help we received from the CDC was beyond our expectations. We felt very blessed,” reminisced Aime. Eventually in need of more space, Perfect Timing moved across the street to its current location in 2006.

20 years later on March 1, 2016, the Brownbills officially launched their own line of quality watches – Reichart, the European spelling of Richard. “We wanted to supply mechanical watches that were 100% Swiss, but we couldn’t find companies who would sell to small populations, and when we did there were too many stipulations.” said Rick. With Rick’s characteristic perseverance, the Brownbills now design their own watches right here in Orillia, and have them built in Switzerland. There are currently 5 models available worldwide, 25 pieces in total, each with its own unique serial number. “One model sold out in two weeks, which is an unheard of response, and a number of people have pre-ordered for the next series of these quality heirloom wristwatches,” said Rick.

Curious about his past, Rick felt it was time to trace is family history, and in December he began to research. Discovering a direct line from his father, Rick learned that his 5th great grandfather was a Clock-maker in 18th century England – Watchmaking was literally in Rick’s blood. Recently, the shop became home to one of his great grandfather’s clocks, standing proudly as it links the Brownbill watchmaking legacy from Leeds, England to Orillia, Ontario.

Whether you’re in need of a repair, a new watch, or a great story, Perfect Timing offers 45 years of personal experience, knowledge & history. The Brownbills are thankful for the CDC’s help and are honoured to be a part of Orillia’s growing community & unique history.