Local ‘artrepreneurs’ brush up on the business of art 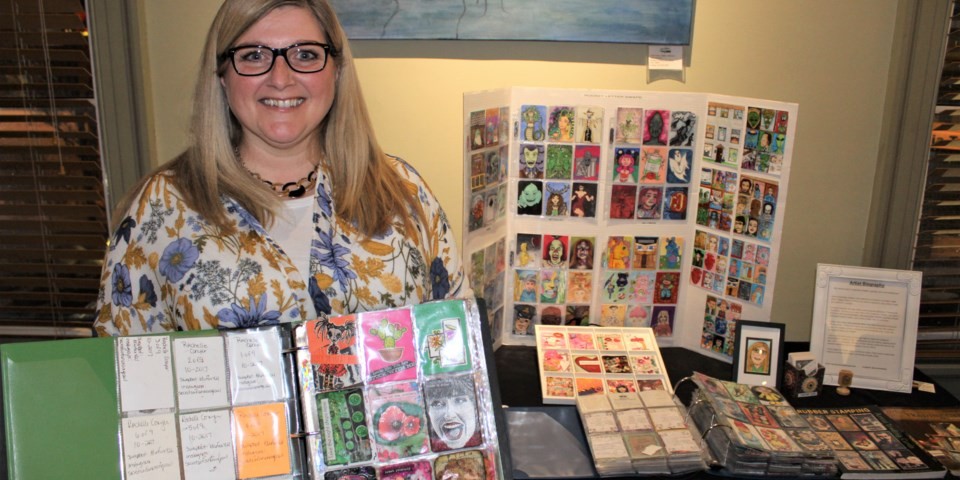 For many artists, their work is, above all else, a labour of love.

That doesn’t mean they can’t turn that passion into a viable business.

Fifteen local artists took part in Artrepreneur, a 13-week program that culminated in an expo Thursday night at the Orillia Opera House.

“A lot of people think arts and culture are just fluff,” said Jacqueline Soczka, the City of Orillia’s manager of culture.

That’s not the case, as she pointed out while citing a 2019 study. It showed there were 800,000 cultural workers in Canada, making up about four per cent of the national labour force. In Ontario alone, the sector contributes $27.5 billion per year to the economy.

The city celebrated the Artrepreneur graduates, or “fellows,” during Thursday’s event. Among them was Christina Petsinis, of Christina Marie Art.

Petsinis listed some of the challenges artists face.

“We experience significant isolation and disconnection between people, businesses, institutions and beyond,” she said.

As a young artist, she continued, “I enter this sector and this industry being aware of a lot of the roadblocks and, hopefully, being able to overcome them.”

That’s what Artrepreneur was about. Each week, the program featured different speakers who brought a variety of perspectives and advice for artists looking to go into business, or expand on their existing ventures.

Jim Clay, of Funky Glassworx Studio, currently operates out of his home.

“My mission is to have a one-stop studio where anyone can come in and learn (about) fused-glass art,” he said, adding he plans to eventually move the studio into a commercial space where he can “educate, create and inspire.”

For Danielle Skentzos, Artrepreneur has allowed her to focus on the business side.

“I look forward to sharing my love of clay with others,” said Skentzos, who owns Shiralee Pottery.

She began pottery as a hobby.

“When I eventually made too much pottery to keep, Shiralee was born,” she said. “It has given me much calm in a very busy time in my life. Pottery is beautiful, functional and you can use it every day.”

Lynn Fisher is going to use the knowledge she gleaned from the program to expand her business, Cedar Creek Ridge Farm. It’s a “bee business,” the Oro-Medonte woman explained, and she plans to offer beekeeping workshops and quilting workshops.

Soczka described Artrepreneur as “a journey.” Some participants were inspired to boost their businesses, while others decided entrepreneurship wasn’t for them.

“We’ve seen all of that come about as a result of this course, and that’s OK,” she said.

Laura Hinsberger is among those who accepted the fact she didn’t want to make money off her Artist Trading Cards, which, as she explained, “you don’t keep — you trade them with other artists.”

For her, it’s all about the thrill of finding unique artwork from all over the world and making connections and friendships with other artists.

“Since I started trading online, the sky’s the limit,” she said.

Hinsberger isn’t in it for the money, but she wants to spread the word and get others interested in the cards. To do so, she has organized an artist trading card swap, which will take place Feb. 10 at 6 p.m. at the Orillia Public Library.

Artrepreneur is a program that was initiated by the York Region Arts Council. The local program was made possible thanks to support from that arts council, the City of Orillia, the Community Development Corp. (CDC), Lakehead University, Tourism Simcoe County, and the Ontario Trillium Foundation.