Jockeying for success is an art form 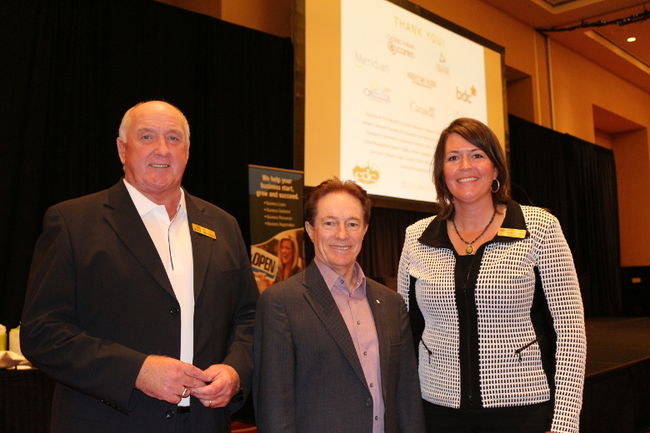 “It’s all about finding your success strategy,” said Wendy Timpano, general manager of the Community Development Corporation, which held the day-long session geared towards helping businesses reach a higher level.

“This gives an opportunity for business owners to learn from others. They can get some great advice.”

The event also featured a keynote address from renowned jockey Sandy Hawley, who recounted overcoming adversity, both as a youth due to his size and later in life after surviving cancer.

“I went out for the senior football team, but they sent me home,” Hawley said, noting his passion for sports, while not always successful due to his slight stature, eventually led to his successful racing career that included 6,450 wins as well as the Lou Marsh Trophy as Canada’s top athlete in 1973 and 1976.

“You can never give up. I never let my size affect me.”

Prior to Hawley’s talk, attendees heard from area business leaders who have made the jump from an initial idea to the creation of a burgeoning enterprise.

While much of the phrasing seemed like it could have been taken from a motivational poster, Timpano said those just starting out benefit from hearing positive messages to keep the faith.

“Every business goes through ups and downs,” said Timpano, who noted her agency runs numerous tactical seminars aimed at targeting a specific business issue throughout the year. “This is a fun day with peer-to-peer networking.”

Radio station owner Paul Larche recounted his early days growing up in Timmins with a love of radio to his current role as overseer of four regional stations (The Dock and KICX).

Larche told attendees his business employs a MOCHA (Make Our Customers Happy Always) strategy in everything it does.

“It’s really a state of mind,” he said. “A lot of people know how they do it, but they don’t know why they do it.”

But the “why” is essential to success and enjoying what one does, according to Larche.

“MOCHA is our why,” he said, noting it’s also essential to have a consistent, proactive strategy along with a positive workplace culture.

“You have to see the world through your customers’ eyes. There are certain ways to make people happy in your business and you need to realize that.”

Brian Gibb outlined his decision to start his seniors’ transportation company Going with Gibb in 2013 after receiving a secured loan from the CDC to help purchase his $50,000 “office” (also known as a wheelchair-accessible minivan).

Gibb, who quoted the Dalai Lama among others, said he did as much networking as possible when starting out while also attending area business conferences such as the annual Lake Country Expo.

He said he’s now served more than 400 customers and logged more than 100,000 kilometres on the minivan.

“You need to get out there and get your name known,” he said, noting entrepreneurs must also have a solid support system for encouragement and help when needed as they venture out.

“I surround myself with a lot of successful people.”

Added presenter Alison Braun of Earth Treks: “Doing what you love is the cornerstone to success.”