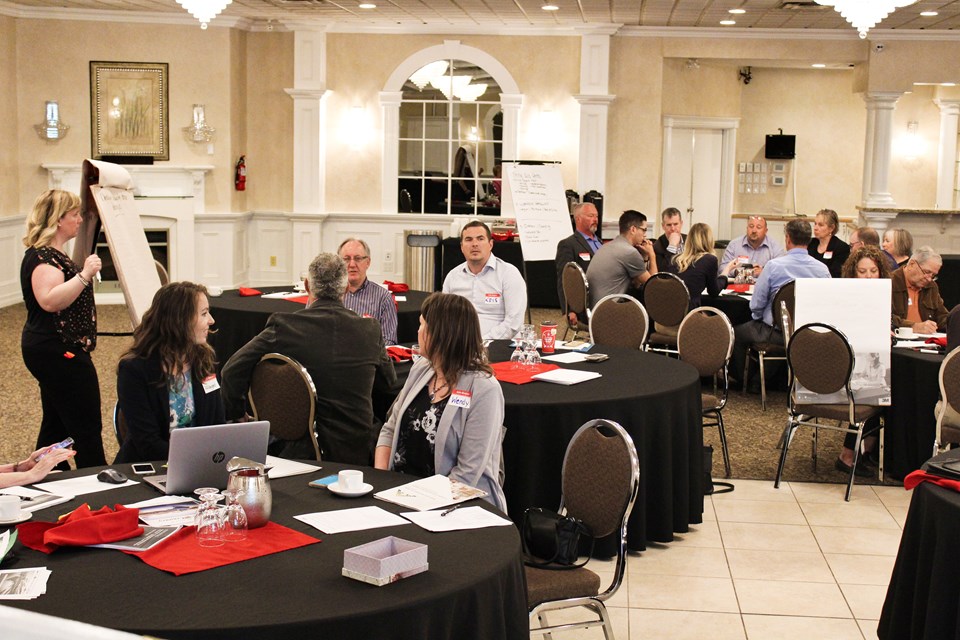 A group gathered Tuesday at the Best Western Plus Mariposa Inn and Conference Centre to discuss ways to attract investors to the area to boost tourism. Nathan Taylor/OrilliaMatters

The trend of “glamorous camping” is one of many ways the region can attract more tourists, a group heard during a meeting Tuesday at the Best Western Plus Mariposa Inn and Conference Centre.

The Community Development Corporation (CDC) has been working with neighbouring municipalities, as well as Ontario’s Lake Country and Regional Tourism Organization 7, to determine ways to boost tourism.

A report presented Tuesday noted more than 40 opportunities were gleaned from various consultations, but, with the help of consulting firm CBRE, that list was narrowed to three: glamping and outdoor adventure, a waterfront restaurant and a family entertainment centre.

“It’s in the experiences, not products. People want to do things with their friends,” said Rebecca Godfrey, tourism and leisure director with CBRE.

With those top three priorities determined, the approximately 25 people in attendance split into groups to brainstorm ideas around how and where those projects could become reality.

Some suggested a family entertainment centre — which could include a restaurant, party rooms and activity areas — could work at ODAS Park or across the road from Orillia’s new recreation centre on West Street. Others thought the city’s downtown/waterfront redevelopment could present opportunities in that area — the plaza at 70 Front St. N., for instance.

The former Huronia Regional Centre (HRC) property also came up during the discussion, but Dan Landry had some words of caution.

“We want to go after the things we can do in short order,” said Landry, the city’s manager of business retention and expansion and industrial development. “Putting the HRC on that list could add another 20 years to the process.”

Local industry stakeholders now have access to investment packages for each of the top three projects. The idea is to have them present those packages to potential private investors, who can use them as a “baseline” to help them decide whether to pursue such projects in the area.

The report even includes estimated capital costs of the projects. A 24,000-square-foot family entertainment centre could cost $5.8 million. The figures for glamping, including 10 geodesic domes, and a 4,000-square-foot waterfront restaurant could be $500,000 and $1.5 million, respectively.

The waterfront will be the easiest sell, said Coun. Ralph Cipolla.

Ramara Chamber of Commerce secretary Dann Oliver was optimistic after Tuesday’s presentation, though he said the township already has some of the attractions that were discussed.

There is also a form of glamping available at two sites in Ramara — Hammock Harbour and McRae Point Provincial Park both offer yurts.

“Some of the basis of what they’re talking about is already functioning in Ramara and we just need to expand and promote it,” Oliver said.

The process of enticing investment to Orillia has already begun.

Landry joined CDC general manager Wendy Timpano at a Dragons’ Den-style event in May — a “speed-dating exercise” that allowed municipalities to meet with potential investors. There, they presented them with the investment packages.

“We had very positive feedback,” Landry said. “We expect some substantial follow-up.”

Dean Beers, president of the Orillia District Chamber of Commerce, said it is important to “focus on what makes us unique” when trying to bring business to the area. That includes two lakes that offer different opportunities.

The report presented Tuesday can be found on the Ontario’s Lake Country website.